In November 2013, the Harrisburg, Pa., Patriot-News published the following apologies and withdrawal: â€œIn the editorial on President Abraham Lincoln’s speech on November 19, 1863 in Gettysburg, the Patriot & Union failed to recognize its momentous importance, timeless eloquence and enduring significance. The Patriot-News regrets the error.

The Gettysburg speech was shattered by the then Patriot & Union who, no fan of President Lincoln, called it “idiot” and deserved a “veil of oblivion.”

Despite the time that has passed, the Patriot-News editorial board made the decision in 2013, more than 150 years after the article was published, to retract and apologize; doing so knowing that their small readership would likely not care about their previous transgression and have no knowledge of it. â€œThe world will not long remember our correction of this institution’s record,â€ they wrote, â€œbut we must do what conscience demands. The Patriot-News chose that day the honorable duty of true journalism.

Journalism is, in a sense, an active arbiter in and of our daily life. It’s easy to think of the greatest accomplishments that occupy the mythological American landscape of journalism and journalists. What is often overlooked or forgotten is the work after a story is published; what happens when the headlines go wrong.

News organizations big and small mess up and confess in big and small ways all the time. Corrections run on A2 page in print for many and alerts run online. But how often are these noticed? How often do you actively seek corrections and updates to news you’ve already read? By reading an article in the morning, you may come away with a different understanding than someone reading that article that afternoon.

Famous, the New York Times was accused of “stealth editing” some articles (but are far from the only ones). Stealth editing is a term used to describe when a news company edits an article online and does not notice the change. More derisory, it is a term used to cry foul of journalists. There are plenty of not-so-malicious reasons to edit an article after it’s been posted online: misspellings or things considered by top officials to be editorially insignificant (whatever that means).

The stealthy edit and slippery slope should worry readers as much as I do. Kalev leetaru written for RealClearPolitics conveyed the scale and gravity of the problem well, writing: â€œFar from an isolated deviation from accepted journalistic practices, stealth editing has become the norm in digital newsrooms from small local media to the most popular newspapers. view of the country. In the age of the web, even our official documents are edited on the fly, permanently changing the concept of historical record of the immutable ledger from the past to a real blackout. George Orwell was right.

The Flat Hat has a long-standing policy that any changes to an item should be noted and only considered a â€œcorrectionâ€. As the Associated Press, from which we derive our standards, the dish: â€œA correction should always be labeled as a correction in the editor’s note. We do not use euphemisms such as “recast”, “corrections”, “clarifies” or “changes” when correcting a factual error. ”

As of January 1, 2016, the Flat Hat has published corrections to 41 articles. About 60% of these were factual corrections. This is not so surprising because most of the things that need to be fixed are factual: names, dates, information, updates. As such, most of the fixes – 28 in fact – can be found in the news section. The remaining 40% was split evenly between citation updates and article clarifications. The number of corrections correlates almost perfectly with the number of articles published, month by month and year by year. 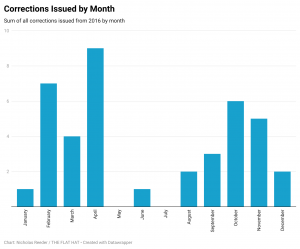 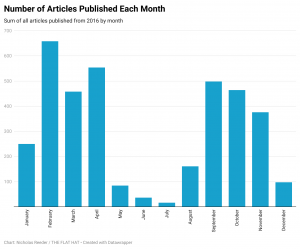 Here is an example of fixes made to Flat Hat in recent years:

“Correction: This article has been corrected to reflect that a quote from Rabbi Gershon Litt had previously been attributed to President Hillel Alexina Haefner ’19. It was also corrected to reflect the fact that Haefner was mistakenly quoted as saying that she had been warned by her mother of the hatred she would face after her conversion to Judaism.

And a personal favorite:

“Correction: An earlier version of this article mistakenly replaced the word â€œmillennialâ€ with â€œsnake personâ€ in a quote from Ben Lambert ’19. This was due to a satirical word replacement browser extension installed on the news editor’s version of Google Chrome, and not an implication that 38% of Williamsburg residents are reptilians.

Typographical errors, editing errors, misunderstanding someone, misunderstanding a situation or a person, miscalculating. These are all real issues that occur and need to be fixed. However, there must also be a balance between correcting and defending your reports. Receiving an email from a disgruntled reader is not enough for a correction, although we may want to look into the matter anyway. Hearing someone with knowledge and corrections is crucial to building a positive and trusting relationship with the community we serve. It is also crucial that we then act on these relationships and information.

The Flat Hat – just last year – had to make those choices, balancing integrity and accountability. With some frequency, various editors and writers will receive emails calling for a retraction or correction of an article. These are often valid points and the section editors dutifully carry out their task, updating the article online and posting the correction. Other times, however, these emails require action from an interested party for The Flat Hat to correct or retract a story at their request. This does not give the right to correction or retractions and does not entail any action.

My fear is that someone will read a story once and then report a lie whether they know it or not before the correction is released. That’s why it’s important to get it right the first time. As Mark Twain has said apocryphally, â€œA lie can go around the world and come back while the truth ties its bootsâ€ (Don’t worry, the irony of this quote is not lost on me).

Matt Lowrie ’22 is the premier editor of Flat Hat standards and practices. He enjoys reading and commenting, but not really writing the news. Email Matt at [email protected] or submit a formal comment or complaint here: https://forms.gle/nr7VfHSVCtqqh8i59.

CORRECTION: 5/10/21 An earlier version of this article contained a typo “… replaced the word” snake person “with” snake person “in a quote …” It has been updated to say “… replaced the word ‘millennial’ with ‘snake person’ in a quote …” correcting the error both in this article and in the original. The total of fixes has been updated from 40 to 42. Article updated with graphics and clarified the role of Nick Reeder.
The irony of this correction is not lost on the author.