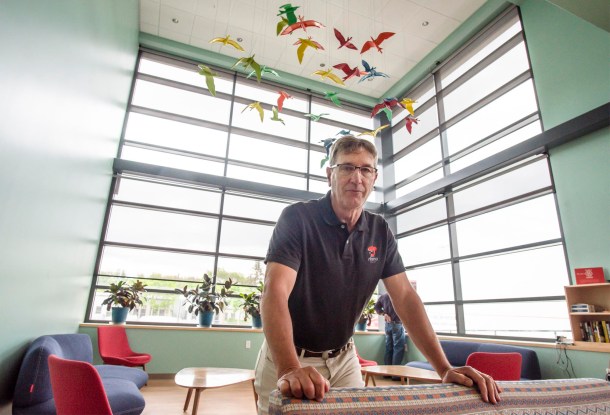 [T]he Vermont attorney general’s office has for years sought to keep Vermonters away from predatory lenders.

In 2012, the state banned payday lenders and other short-term lenders with very high interest rates. But predatory short-term loans are available online, and the attorney general’s office continued to receive complaints from Vermonters who were stuck in an interest rate payment cycle of 400% or more for loans they could not repay.

Today, a private employer, Rhino Foods in Burlington, is working to promote an alternative to high interest commercial loans. The company’s newly formed foundation is spreading the word about Income Advance Programs as a # 1 priority.

“We support workers’ financial security that would make business sense,” said Ted Castle, CEO of Rhino, which makes frozen chocolate chip cookie dough for food companies like Ben & Jerry’s. “Our goal is to have an impact on the way business is done. “

Rhino Foods is a B Corp., a company that favors social and environmental performance, public transparency and legal responsibility. Through its Income Advance Program, which Rhino has offered since 2007, workers can borrow up to $ 1,500, no questions asked, and repay it through a regular weekly $ 50 deduction from their home. salary. The interest on these loans is around 16%, which is the norm for short-term loans, according to the attorney general’s office.

Small, short-term loans can be essential in helping workers keep their jobs, Castle said. Over the years, he has seen workers take time off work due to unexpected issues such as car problems. Without the money to pay for the repairs, some good workers ended up losing their jobs, he said.

“Forty-three percent of Americans don’t have $ 500 in savings,” said Castle, who speaks nationally on his company’s income advance program at B Corp events. . “If they don’t have money, they miss work, they miss taking the children to school – it gets out of hand.”

Vermont is considered a national leader in protecting consumers from predatory lending. The state banned payday loans in 2012, and it also caps interest rates at 12% to 24%, depending on the type of loan. In addition, the attorney general’s office has suggested that Vermont employers offer income advances to workers as a way to help them avoid predatory loans.

Employer involvement is helpful because even as Vermont regulators seek ways to prevent predatory lending, lenders are modifying their products to circumvent the law, according to a 2017 article in the Vermont Law Journal.

High-interest lenders offer alternative products, such as installment loans and open lines of credit, that do not fall under state payday loan laws, the article said. Of the 15 areas that ban payday loans, four do not cap charges on open-ended credit and five allow annual percentage rates of up to 65%.

“Only six, including Vermont, limit full APRs on small loans to 36% or less,” the article said.

The Working Bridges Collaborative Employer of United Way of Northwest Vermont – an effort to help workers find and keep jobs – was an inspiration for the Rhino program, Castle said.

Rhino does not lend money directly; she works through the North Country Federal Credit Union, which now has 40 partner companies in these small loans and made 1,000 income advance loans last year. North Country is working with Rhino’s human resources office to set up the loan, said Jeff Smith, senior vice president of loans at North Country.

The loan is automatically approved if the employer is on the credit union’s list, Smith said. The default rate is around 3% to 4%.

“It’s more than what we’re amortizing on other loans, so it’s a riskier loan, but comparatively it’s not bad,” Smith said.

Smith said the credit union works with about 40 employers in Vermont who offer income advance programs, and he talks to his counterparts at other credit unions a few times a month.

“Some said it was too risky,” he said.

Other companies already have their own version of a program that provides loans to workers.

“We support any solution that brings market opportunities for people to avoid the dangers of payday loans,” Smith said. “It doesn’t have to be one size. “

“The cool thing is that they borrow from a bank so their credit scores go up,” he said. He added that no one asks workers why they are borrowing money.

“It’s making a judgment on what’s the right need for that person and what’s not,” he said.

Mascoma Bank, which has its administrative offices in White River Junction, works with a dozen employers in Vermont and New Hampshire, including King Arthur Flour – also B Corp certified. – and Simon Pearce to provide income advance programs. Mascoma, a B corporation, sees advance income programs as a way to help people become more self-sufficient.

Through the Mascoma program, workers can borrow up to $ 1,500 at an interest rate of 16%. Ken Wells, director of personal loans at Mascoma, said the default rate is similar to the bank’s other consumer loan programs.

“It’s not a profit center; if anything, it’s the opposite, ”Wells said. “We’re probably not making any money on these loans.

Instead of a payroll deduction, Mascoma instructs the employee to open an account and deposit part of their payroll into a separate account as a loan repayment. The local United Way provides advice to employees who are struggling to make their repayments, Wells said.

He added that North Country has been a national leader.

“We have been in contact with them and they have been helpful to us,” Wells said.

Ned Castle, son of Ted Castle, is leading the Rhino Foundation’s efforts to spread the word nationwide. He said many programs encourage workers to continue making the $ 50 payments – but into a savings account – after the loan is paid off.

“You take a situation where someone was in a financial emergency, and you deal with it, then the benefit over time is that they build up their credit and potentially open a savings account for the first time. “said Ned Castle. “In terms of long-term impact, these two things are more important and life-changing – credit and savings – than coming out of the emergency.”

Ned Castle works closely with B Labs and with the Filene Research Institute, who created tools to help credit unions adopt such programs. FINRA Foundation for Investor Education, a consumer industry group that works under the oversight of the Securities and Exchange Commission, also studies employer loan programs.

Income advance programs can help banks and credit unions attract new customers, Smith said. Many people who have recently arrived from other countries are participating, he added.

“The way we grow is to attract new members, and this program basically costs nothing,” he said. “But we didn’t do it to add value to our bottom line.”

Want to stay up to date with the latest business news? Sign up here to receive a weekly email on all of VTDigger’s reports on local businesses and economic trends. And check out our new Business section here.